Queer spaces have always felt like home. From meeting like-minded people to not being on red-alert for the constant risk of unwelcome groping and everything in between mean that I feel safe.

But what isn’t fun is when we are made to feel like interlopers in our own spaces. 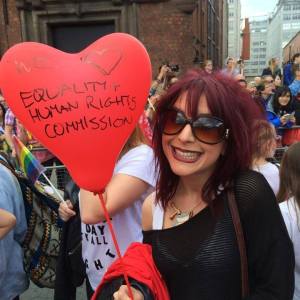 Last week at Manchester Pride my friends and I negotiated our way through our own wardrobes.  Yes negotiated. On packed nights out where entry to the most popular bars and clubs is at a premium, we know that we have two options: try our best to fit in with the dress code  or risk getting turned away.

I’ve been told by bouncer.

I’ve been asked in bars.

And straight people? Well they fall over themselves to tell me they’d have never know I was a lesbian.

Well I’ll tell you what it means. It means that when at 13 I found the L Word and at 15 I found Sugar Rush, I was convinced that when I came out things would have to change style wise. The women portrayed in front of me had an androgynous , distinctively queer style and it began to play on my mind. When you’re young and have no other points of reference, and I had no other points of reference, these images have a huge impact. For the first time I had access to my own tiny corner of the queer community, and I didn’t fit.

‘Fashioning an Identity‘ makes a good point when it says that,

“Lesbians are rarely part of the fashion party.”

When people inside and out of the community talk about “looking like a lesbian” it is rarely said in a complimentary manner. It is often a negative judgement on someone’s chosen style.

Enter any gay club and you’ll see a range of distinct lesbian styles: plimsoles, jeans, boxers (yeah I can see ‘em) and checked shirts, leggings, slogan/band tees and converse, cardigans, chinos and high-tops. Women who you can spy from a distance. Women who look like lesbians. Women who’d look like lesbians whether you saw them on the street, in a bar, or in a library. Women who are hot!

Most cultures and communities have a distinctive style and fashion. They can be used to demarcate communities and allow their members to identify themselves to one another. Looking like a lesbian is both useful and desirable because it allows you to find and be found by your fellow queers in both queer and non-queer spaces. This obviously has it’s downsides – namely being found by those you don’t want to find you. But you are recognised, acknowledged and most importantly accepted by your own community.

It is tiring being constantly invisible: persuading bouncers that you should be allowed into your own community’s space. It’s tiring coming out only to be told you don’t belong, don’t look right, don’t fit. And it’s exhausting hearing other queer women’s misplaced defensive whispers when you dare enter queer spaces. I look forward to the day when a wider range of styles will be identified as “distinctively queer”. Where a distinctively queer femme style will receive the gay nod in the street. But I will not change my style for anyone who has too much of a closed mind to recognise all of our rainbow spectrum! 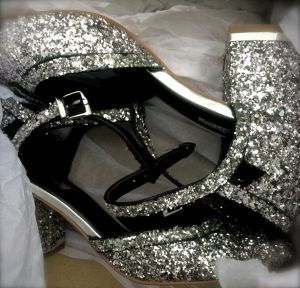 Much more my style!

…Besides, I don’t suit chinos….

Hazel is the editor of the Gay Agenda UK. Researcher by day, she enjoys cooking, reading, and drinking more tea than is healthy by night. You can contact her about blogging for the Gay Agenda UK on thegayagendauk@gmail.com and follow her personal twitter here: @hazelmarzetti.