La Clique comes with a hefty price tag of twenty quid per ticket, but with excellent reviews it seemed like a perfect treat for my girlfriend’s parents whilst they were in town! We rocked up to its opening night at half past nine and the queue was already weaving it’s way down George Street. If you’re keen to invited up onto stage to be part of the show you need to be in the inner circle and so make sure that you turn up early. You can grab a drink for one of the many nearby bars, so you’ll be kept entertained. Unfortunately there seemed to be a number of difficulties turning the venue around and so we waited outside until about quarter past ten.

The show is performed in the beautiful Spiegeltent which looked like pure luxury. Unfortunately the seats were not. Scratchy, stiff and too close together I would recommend heading to the end of the aisle for any of you on the tall side and leaving your best tights at home.

The show opened with a performance from their excellent jazz band. A vibrant performance showcasing each of the individual musician who feature subtly in the rest of the performance. This was followed by their opening act…

I mean seriously that’s weird right? The giant rabbit jumped about the stage, munched on carrots, did the tiniest bit of singing, but the majority of his act seemed to revolve around holding up a giant sign saying ‘gay’ which received a bundle of laughs. I just did not get it. The bunny simply didn’t seem to have an act. The gags all relied on the performer being an older man, who was gay, very camp, and wearing a bunny suit. None of which seemed funny. Just bizarre.

Fortunately, this weird act was followed by some wonderful. There were the couple who performed complex lifts whilst roller-skating (for those of you puzzled, think ‘Dancing on Ice’ style), and whilst not for the faint hearted they did ask for some audience participation. A stripping trapize artist and a beautiful burlesque act. And a magician with a tiny chihuahua (he get points simply for his puppy!).

This show was good. But controversially, considering it’s fantastic reviews, I really don’t think worth the hefty price tag!

Ok, so before I start I want to clear a few things up.

1. This show is not waving the flag for feminism.

Right now we’ve got that out of the way, we may continue.

As someone who is generally irritated by fairy tales, princesses and Disney. I really enjoyed this show. It was light hearted, fun and the comic’s lovely, friendly attitude made up for any of the obvious stereo-typing that the show relied heavily on. 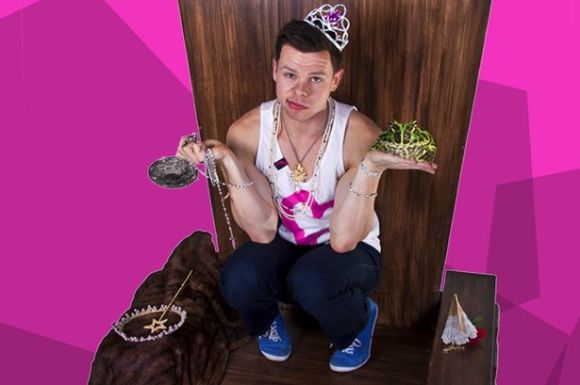 We begin with an introduction to our princesses who, along with Aaron’s unfortunate flatmates, are used to guide us to dating delight. Along the way we make stop overs with Disney, some real-life royalty and a Princess of Pop. This show is definitely unbridled camp. Aimed quite acutely at the hererosexual woman, there are wigs, boy-band dancing, and a range of cheesy pop music which should only be acceptable at a student union bar. But the thing about this show (in fact all of Aaron’s shows, I have indeed stopped by to watch before) is that they end with a touching message. And this one did too. I’ll leave you to discover it for yourself.

As part of the free fringe, Aaron’s show is an excellent feel-good show in a great venue. Drinks are reasonable and the timing is good. Plus, he is a sweet heart! So if you’re feeling a little low / you’ve just been dumped you / you’ve had one internet dating fail too many give it a go. You might just leave feeling quite a lot better!

So I opened my festival experience with a show that sounded like fun! I imagined it being some sort of extra-special, all singing, all dancing lesbo-feminism which would right up my street. I had my heart set. After a lot of talking it up I convinced my girlfriend (renown to be a reluctant hero when it comes to politics / feminism / my ranting) to accompany me. Now this required an after work race down to the Stand, as the show is inconveniently (for Edinburgh residents) shown at 17.50, literally just after work with little room for travel time.

After all the persuading I then read the shows write-up in the Festival brochure (I know I got over-excited at the title) and began to worry that my gung-ho attitude had been a little extreme. It had one line that stood out,

‘feminism without all the boring preachy bits’

which made me worry that we were about to go and see the ‘I’m a feminist, but not really a feminist’ brand of comic.

However, I shouldn’t have worried. I left feeling like I had had a nice hot cup of tea in a cosy chair. Comfortable, cheerful, but my life definitely wasn’t changed. It’s a nice show that raises some contemporary feminist issues like the constant barrage of twitter trolls who attempt to rule the internet, and the number of magazines on our supermarket shelves that seamlessly objectify and degrade women. The latter was demonstrated impeccably by a young man who replicated a number of the delightful poses that we see in lads mags (if you can’t imagine it, some similar examples can be seen here: http://www.buzzfeed.com/jpmoore/men-ups-manly-men-in-classic-pin-up-poses). My only slight concern was the number of ‘Your Mum’ jokes which the comic admits to planning on behalf of one part of a TV presenting couple! Blame the man, not the Mam, for his bad behaviour Mary!

I had no complaints. The show was nice and feel good. I would definitely recommend it to those of you who have friends who are yet to realise their feminism.  It’s accessible, non-aggressive and a good introduction to the challenges faced by women in 2013. However, to anyone well versed in their contemporary feminism looking for something to challenge, inform or broaden their feminism, this is definitely not your gig.